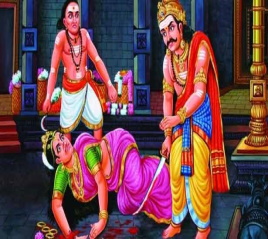 Kalarsinga Nayanar was a Nayanar saint, and a strict follower of Shaivism sect. He ruled his pallava dynasty in a proper manner. During his period, he spread the shaivism sect throughout his region, and people in his region were lived happily and peacefully.

Kalarsinga was a Pallava king and conquered many kingdoms and become a great emperor. He was an ardent devotee of Lord Shiva, and he went to many places to visit Shiva temples. Once, he travelled to Thiruvarur along with his queen and worshipped Lord Shiva at the Sri Achaleswarar Temple. The queen picked a flower from the flower garden in the temple and smelt it. Seruthunai Nayanar who was serving at the temple noticed the queen’s actions, and got angry with the queen and punished her by severing her nose. The king Kalarsinga enquired, and Seruthunai Nayanar told about the entire incident. Kalarsinga considered that the punishment given by the nayanar to the queen was inadequate, and with his sword, he chopped off the hand of the queen also, by which she lifted the flower. Karlarsinga was blessed by Lord Shiva for his noble action, and the queen’s nose and arm was restored by the grace of Lord Shiva.

After his death, he reached the divine abode of Lord Shiva, the kailasa and is still serving Lord Shiva and Mata Parvati and chanting his shiva panchakshara mantra “OM NAMAH SHIVAYA”.

Sundarar praises Kalarsinga Nayanar in the famous text “Tiruthonda Thogai” and describes his greatness of serving the god with much loyalty and faith.

Kalarsinga Nayanar is worshipped in the Tamil month of Vaikasi, and he is also worshipped as one among the nayanars in the Shiva temples.