In: Nayanara, Shiva, Temples
With: 0 Comments 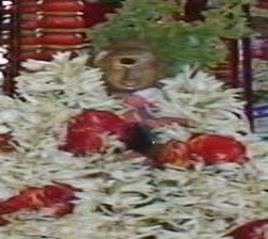 Munaiyaduvar was a Nayanar saint, and a great devotee of Lord Shiva. He was a strict follower of the principles of shaivism.  Munaiyaduvar is described as a soldier, who would fight for the weak and non-courageous kings and use the wealth received from them in service of Lord Shiva and his devotees. Munaiyaduvar also used his earnings for renovating the ancient temples and conducted regular pujas at the shiva temples.

Munaiyaduvar was born in Needur in Nagapattinam district of Tamil Nadu. He belongs to vellalar caste. He was an ardent devotee of Lord Shiva. He was very much interested in serving Lord Shiva and his devotees, and he had done this noble act till his death. He was a great soldier and was skilled in handling all kinds of weapons during the battle. After living a peaceful and a glorious life by doing the service of Lord Shiva, after his death he attained Kailash, Lord Shiva’s Holy abode.

Swami Sivananda praises the Nayanar towards his righteousness in advocating his duties and he also praises his great shiva bhakti. Sundarar praises Munaiyaduvar in the sacred text “Tiruthonda Thogai” and informs us that he is a great shiva devotee and served properly to Lord Shiva and to his devotees.

Munaiyaduvar is specially worshipped in the Somanathaswami temple at Needur. Lord Shiva had given his appearance to him in this temple. A shrine is dedicated to him in the temple.