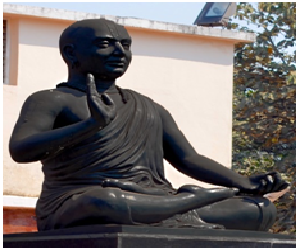 Balarama Dasa (15th century AD) was born in odhisha and was a great saint and poet. He wrote several poems on Lord Rama and Krishna, and sung their glory in temples. His work Jagamohana Ramayana was considered as a famous text among the odhisha people, and it is written in very simple language, and even a lay man can read it. He contains great knowledge in all the subjects and an expert in vedas, and also learnt all the regional languages.

He was born in a village at Odhisha, and his father was also a poet who served under a king of that region.  He was an ardent devotee of Lord Jagannatha. He met the great saint Sri Chaitanya and he has initiated him into the bhakti path. He went on many religious pilgrimages and worshipped the gods and goddesses in the temples. He also met many great saints and discussed with them about the spiritual matters. He died at a village near Konark. And a shrine is dedicated to him near this village. Even now lot of people are visiting and worshipping him in his shrine and were got relieved from their problems.

Due to his great talents, he was praised by the kings and they rewarded him lot of money. But he distributed all the wealth to the poor, and lived a simple life. He used to worship Lord Rama and Krishna regularly, and offered food to the devotees at his home and in the temples. He was also against caste discrimination, and treated the people as the children of the god. He was a humble saint who has rendered selfless service to the mankind and the god throughout in his life. He has conducted many spiritual discourses on Lord Krishna and Rama, and spread the bhakti spirit among the people.