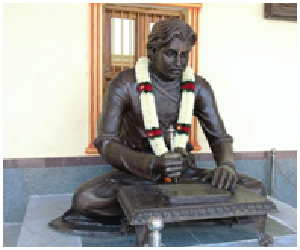 LAKSHMIPATHI – A GREAT POET OF KARNATAKA

Lakshmipathi (17th century AD
) was born in Mysore in the family of Vedic pundits and poets. His family deity was Kanchi Varadaraja, and he finished his studies at his native place, and at his teenage, he had settled in Melkote in Mandya district. He belonged to the lineage of the great Vaishnavite saints, Sri Nathamuni and Aalavandaar, and he was a disciple of Sri Kadambi Singaracharya.

He was conferred with the title of Chikkupadhyaya by the Mysore King Sri Chikka Devaraja Wodeyar, and he had served to him, as Minister and Guru.

He was an expert writer, and he had written more than 30 works, which was appreciated by the Royal family, and he was highly awarded for his talents.

Some of his Famous Works are:

Chikkupadhyaya was a famous Vishnu devotee, and similar to his ancestors, he dedicated his entire life towards writing bhakti poems on Lord Vishnu, and sung in praise of him in the Vishnu Temples. He participated in the debates held at the king’s court, and won in the debates. He was well known for his simple style of writing.