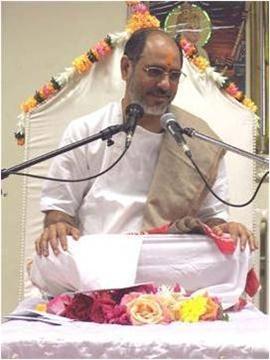 Pujya BhaishriRameshbhai Oza, popularly known as Bhaishri, is the modern age spiritual leader who is based in Gujarat and has dedicated his life for the spiritual upliftment of the millions. Bhaishri recognizes spirituality as the only way of life and by spreading his scriptural knowledge he has emancipated lives of millions across the world.

Bhaishri is greatly revered for his institute Sandipani Vidyaniketan, with Headquarters in Gujarat and branches in Mumbai, U.S, U.K, Australia, and New Zealand. His philosophical yet pragmatic method of teaching the essence of ancient scriptures has endeared him to millions of followers.

Throughout the year Bhaishri is flooded with millions of letters from those seeking mental tranquility. He is being referred to as Bhaishri by his disciples as in him; they find an image of an elder brother providing them love, support and spiritual guidance.

Bhaishri was born in a Hindu Brahmin family on 31st August 1957, at Devka village, in Saurashtra, Gujarat. Bhaishri belongs to the Audichya community and was born to Late Shri Vrajlal Kanjibhai Oza and Smt. Laxmiben Oza.

After receiving his formal early education at ‘Tatvajyoti’ Sanskrit school in Rajola, Bhaishri moved to Mumbai to pursue further education. Here, he completely engrossed himself into learning ancient scriptures.

As a young boy, Bhaishri regularly attended his uncle, Shri Jeevarajbhai Oza’s spiritual discourses. In fact, it was Shri Jeevarajbhai who first noticed the spiritual spark in Bhaishri after he started showing keen interest in scriptures like Ramayan, Shrimad Bhagwat, Bhagavad-Gita and Goswami Tulsidas’s Ramcharitmanas. At the tender age of 13, Bhaishri revealed unusual spiritual potential by confidently holding a spiritual discourse on Shrimad Bhagavad-Gita. Again, at the age of 18 he set new standards by reciting his first Shrimad Bhagavat katha, in Mumbai, India.

As time went by, Bhaishri evolved into one of the most popular spiritual orators of the modern era. His following also grew meteorically with people from U.S., U.K., Canada, Africa, Portugal, New Zealand and Australia started attending his discourses. By disseminating his Vedic and Upanishadic knowledge amongst the masses he envisages to take the past into the future.

Contribution to the society

Bhaishri illustrates that knowledge can only phase out the prevailing ignorance from society. Sandipani Vidyaniketan was established by Bhaishri to eradicate the cloud of ignorance and inculcate spiritual effulgence amongst the young minds. In the year 1980, he founded the most prestigious Sandipani Vidyaniketan School at Porbandar, Gujarat to instill spiritual virtues, lineage and attributes directly from the Vedas and the Upanishads. The School houses 500 resident students and provides courses on priest craft and Sanskrit. Two comprehensive Graduate courses offered at Sandipani Vidyaniketan School, also known as ‘Rishikul’, are –

In the word of Bhaishri, “You cannot change the direction of the wind, but you can adjust your sails.”