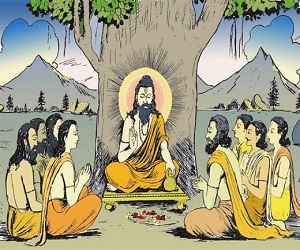 Ayodha-Daumya was a great sage who lived during the Dwapara Yuga. His main disciple was Aruni, who was a great sage, a learned scholar, and he contains very good qualities. Rishi Daumya was mentioned in Holy Vedas, and he is described as a powerful rishi. He was a staunch devotee of Lord Vishnu, and performed severe penance on him, and obtained great powers through that.

He had many disciples and he shared his spiritual knowledge with them. During the Kurukshetra war, he met Pandavas and Lord Krishna, and discussed with them. He also asked his disciples to walk in the path of Dharma, and to live their life in a noble manner. He lived a simple life, and used to feed birds and animals.

As per legend, when he gives religious discourses and spiritual teachings, even the birds and animals would eagerly watch his discourses, and they have moved with him in a friendly manner. It is believed that after the end of Dwapara Yuga, he has attained salvation.