In: Bhakti, Rishi Men
With: 0 Comments 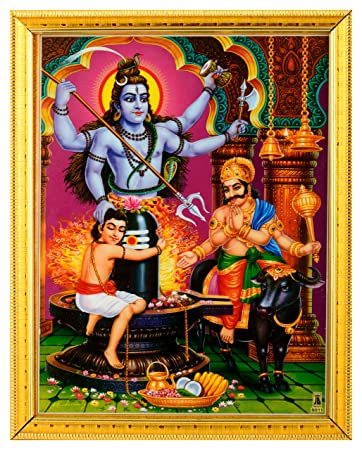 INTRODUCTION
Markandeya was the son of Rishi Mrikandu, and was born with very good features. Similar to his father, he used to worship Lord Shiva at the Ashram and perform pujas and abhishekhams to the Shiva Lingam. According to legend, when he was nearing to lose his life by Lord Yama, he was safeguarded by Lord Shiva, and he has become a Chiranjeevi in this earth. He appears in the form of a boy, and looks like a full moon, and contains great spiritual powers.
He had shared his spiritual knowledge with various rishis and discussed spiritual matters with them. Once he had conversed with Lord Nandhi Bhagawan, and came to know the greatness of Lord Shiva. He also got the divine darshan of Lord Vishnu, and once when Mata Lakshmi took birth in the earth, Rishi Markandeya affectionately brought up her in a good manner, and got married to Lord Vishnu. Through that, he has become father-in-law of the Lord himself. Through the divine grace of Lord Shiva, he would permanently live in this world even during the entire destruction of the universe, and meditates on god, and would do goodness to his sincere devotees. It is believed that now, he is living in the Rishi Mandala, and performing severe meditation on Lord Shiva.
Let us worship the great rishi and be blessed.
“OM SRI MARKANDEYA MAHARISHIYE NAMAHA”
“OM NAMAH SHIVAYA”
“OM NAMO NARAYANAYA NAMAHA”
WRITTEN BY
R.HARISHANKAR