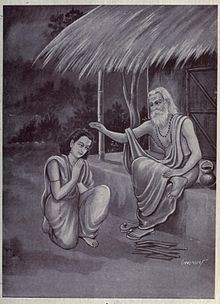 Kacha was an ancient sage and the son of Deva Guru Brihaspati. He is also mentioned in various puranas and in Mahabharata.  He was known for learning all the divine scriptures from his father as well as from the demon guru Sri Sukracharya.

Once Kacha met Sukracharya and become the disciple of Sukracharya, to learn the secret of the Mrita Sanjivini mantra in order to bring back the lives of the demi gods again who have lost their lives during their battle with various demons. Kacha also impressed his guru’s daughter Devayani, who falls in love with him.

On knowing about the incidents, the demons tried to kill Kacha for several times, since he cunningly approached their guru for knowing the secret of the Sanjeevini Mantra. But sukracharya brought back the life of kacha, with the help of the mantra.   After learning the mantra, when Kacha was decided to go back to Deva loka, Devayani expresses her love for him and asks him to marry her. Kacha tells her that being the daughter of guru, it is not good to marry her, since he consider his guru sukracharya as equivalent to his father as per the Hindu Dharma. On hearing the words from him, Devayani got angry with him and she cursed that he will forget the Mrityu Sanjivini Mantra whenever he tries to use the mantra.

Since his attempt to use the mantra was failed, he returned to Deva Lok and narrated the entire incident to his father, Brahaspati.  He calmed down his son, and asked him to get more divine powers by doing meditation on Lord Shiva. He obeyed his father’s instructions, and performed severe penance on Lord Shiva, and got great spiritual powers through that.

Let us worship the great Kacha and be blessed.