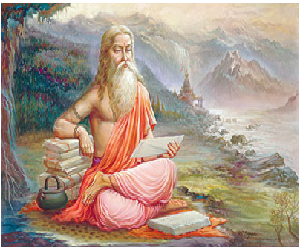 Rishi Madhuchandha was mentioned in Ramayana and Mahabharata, and also in Rigveda. He is the son of the great sage Sri Vishvamitra. Madhuchanda contains good knowledge in Vedas, Shastras, and he was an expert in all kinds of arts, and was educated under his father Vishvamitra.

Madhuchanda also contributed some portions of text in the Rigveda, and in that, he had mentioned the greatness of Lord Agni Bhagavan. Since rituals are done only by fire, he considered the fire god, as the most important and worshipful deity.

Similar to his father Rishi Vishvamitra, he had performed meditation on Lord Brahma, and got great powers. During Ramayana, he met Lord Rama along with his father Vishvamitra, and during Mahabharata, he appeared before Dhrishtadyumna, an AMSHA of the fire god, and blessed him.

Rishi Madhuchanda had many disciples, and he taught the noble Vedas and other divine subjects to them. Some of his teachings are as follows: