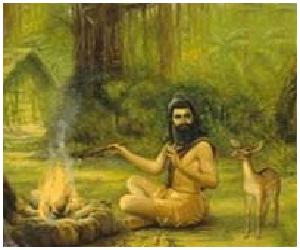 Cikanti was an ancient sage who lived before thousand years ago. He was a staunch devotee of Lord Muruga, and he lived in a small Ashram at Srilanka near Kathirkamam Murugan Temple. Daily morning, he used to worship Lord Muruga in the temple, and then only he used to have his breakfast.

Once while he was meditating Lord Muruga, nearby the temple, one roaring lion tried to attack him. Immediately one gigantic wild peacock appeared in front of the lion, and chased it away from that place. Sage Cikanti came to about this miraculous incident through his spiritual powers, and immediately joyful tears were flown from his eyes, and he sung several songs in praise of Lord Muruga. In appreciation to his bhakti, Lord Muruga appeared before him and blessed him.

Sage Cikanti also relieved the diseases and sins of his devotees, and showed them the spiritual path. He also inculcated the “MURUGA BHAKTI” in the minds of his followers and disciples, and gave them the everlasting bliss in their lives.

After rendering noble service to the society and to the almighty for several years, after his death, sage Cikanti had attained salvation due to the grace of Lord Muruga.

Some of the contents contained in his sweet poems are as follows: