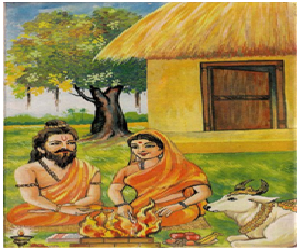 Sudabas was an ancient sage, and his wife was Piruchini. Though they contain very good qualities, but they didn’t have children. Due to that, they were very much worried, and began to perform penance on Lord Vishnu. After some time, pleased by their devotion, Lord Vishnu had appeared before them, and said that he himself would be born to them, as Piruchinikarpan. Based on the Lord’s words, Ma Piruchini had delivered a pious son, and the Rishi couple named their son as Piruchinikarpan, as per the words of Lord Vishnu.

The divine son of the Rishi couple, learned all the Vedas and Shastras at his young age itself, and he began to give spiritual teachings to the sages. The place where he lived, become prosperous, and food crops yielded a good harvest. Lot of people willingly listened to the divine lectures of Piruchinikarpan, and they attained the lotus feet of Lord Narayana.

As per the boon given by Lord Vishnu, Sage Sudabas and Piruchini in their next birth were born as Rishi Kashyapa and Aditi, and Vamana was born as their son. Vamana sent Mahabali to the Sutala Loka, and restored the kingdom of heaven to Lord Indra. Vamana sincerely served his parents, and he also gave valuable teachings to them.

Though Vamana also lived in the Indra Loka for some time, but he lived like a pious sage, he safeguarded the Devas from dangers, and he had discharged his duties like chanting of Vedic Mantras, delivering spiritual lectures amongst the Devas and Rishis, and he remained as a gentle and soft person, and he didn’t shown pride before others at any time, though he was born as a great avatar of Lord Vishnu.

In their next birth, Kashyapa and Aditi were born as Vasudeva and Devaki at Mathura, and their son was Lord Krishna. Though during his childhood, Krishna was lived along with Yashoda and Nandagopa, but at his young age, he has united with his biological parents, Vasudeva and Devaki, and become their lovely son, and also made them cheerful through his wonderful smile.