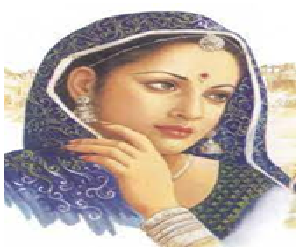 Dakshina Prajapatya, also known as Khyati, was one of the daughters of Lord Daksha, a great Prajapati and the mind born son of Lord Brahma. She was born before several lakhs of years ago, and she had contributed some texts in the Rig Veda (10.107). She lived a very long life, and after her death, she reached the abode of her father Lord Daksha. Dakshina Prajapatya is also the sister of Ma Sati Devi, who was later known as Parvati Devi and Shakti Devi. Dakshina Prajapatya is also considered to be an aspect of her sister Ma Parvati Devi, and she is very beautiful, pure, chaste and noble woman.

When Lord Veerabadra had destroyed the Daksha Yagna, and chased out the divine devas from the Yagna, it was Ma Dakshina who pacified Lord Veerabadra, by reciting his holy names. She had admitted the mistake committed by her father Lord Daksha, and asked apology to Veerabadra on behalf of her father. Veerabadra was satisfied with the prayers of Ma Dakshina, and gave various boons to her. Dakshina is also mentioned in other holy texts of Hinduism also. She is considered as superior among the demi goddesses, and it is believed that she is still discharging her creation duties by assisting her father Lord Daksha, and her grand-father Lord Brahma. She was blessed by her uncle Rishi Narada, and as per his advice, she began to chant the Mantras of Lord Vishnu also, in order to increase her spiritual powers.

As per the Puranas, it is believed that Ma Dakshina would become the consort of Lord Manu, during the next Krita Yuga, and would produce many noble children from their union. It is also believed that after the end of Kali Yuga, there won’t be much suffering in the lives of the people, and during the next Krita Yuga, all of them would live a very happy and a peaceful life, without any hindrances, due to the blessings of Ma Dakshina.