In: Gurus, Rushi- Men
With: 0 Comments 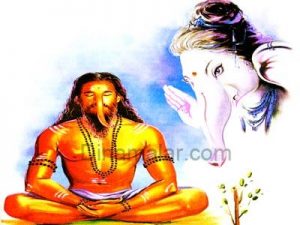 INTRODUCTION
Purusundi was an ancient sage who lived during the Treta Yuga. His birth name was Vipradhan and he was a hunter, before attaining the status of the divine sage.
LIFE
Hunter Vipradhan was used to hunt the animals and through that he had earned for his livelihood. Once, there occurred a severe drought in his place, he suffered from poverty, and hence started doing robbery. Once he tried to take the belongings of a great rishi Sree Mukkala Munivar, and due to his kind approach and through his advice, he stopped doing sinful acts, and he had started doing severe penance on Lord Vinayaka. After several years, Lord Vinayaka appeared in front of him and granted him a wish fulfilling tree and also blessed him. Due to the blessing of Lord Vinayaka, Sage Purusundi’s appearance had been changed to that of Lord Vinayaka.
Once a newly married couple laughed at him and commented his appearance, and he immediately cursed them to become a tree. And as per their request, he felt pity on them, and granted them the boon of becoming holy trees, and also Lord Vinayaka will dwell between the trees, and people will worship the holy trees, while worshipping Lord Vinayaka.
Lord Indra was attracted by the divine tree, and approached sage purusundi and asked for the divine wish fulfilling tree, KALPAKAVRIKSHA in order to take it to the swarka loka. And immediately, Purusundi gave him the divine tree and continued his penance on Lord Vinayaka.
Seeing his noble act, Lord Vinayaka had granted him mukti.
IMPORTANCE
Similar to sage Valmiki, he also left his bad deeds, and become a great sage. His penance had lasted for several years without food and water. He was such a great devotee of Lord Vinayaka. He had contained the powers equivalent to that of Lord Vinayaka, and is always inseparable from him.
From this incident, we should also have to cultivate bhakti on god, so that we can live peacefully in this earth, and also can finally attain the divine abode.

Let us worship the great sage Purusundi, and be blessed.