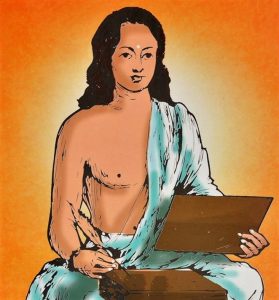 INTRODUCTION
Madhavdev (1489–1596) is an important Saint of Hindu religion and was a great disciple of Sri Sankardev. He became the successor of Sankardev after his death. He is well known for writing devotional poems.
LIFE
Madhavdev was born in the year 1489 and he was educated at Narayanpur, Assam.He continued his education under a great scholar named Rajendra Adhyapak. He became well versed in Hindu Puranas and other ancient hindu litetature.Madhavdev met Sankardev and became his disciple in the year 1532, and he followed his teachings and spread it among the people.

The Saint died in 1596 at West Bengal.
FAMOUS WORKS
1. Naam Ghosa
2. Bhakti Ratnavali
3. Janma Rahasya
4. Naam Maalikaa
5. Srimanta Sankardev
6. Dhyana Varnana
IMPORTANCE
Madhavdev was an obedient disciple of his Guru Sri Shankar Dev. He was a sincere devotee of Lord Krishna, similar to his guru. He has written several songs in praise of Lord Krishna and sung them with utmost bhakti. He has also spread the bhakti spirit among others. He insisted others in doing regular worship of Lord Krishna, in order to attain MUKTHI. According to him, the only way to escape from the evil effects of KALIYUGA, is to surrender to the lotus feet of Lord Krishna, with full of devotion and bhakti in mind. And he further says that “Lord Krishna is not expecting anything big from us. Even if we offer some basil (TULSI) leaves to him with sincere devotion, he will readily accept it and give his blessings. Hence pray for getting the divine grace of Lord Krishna”.