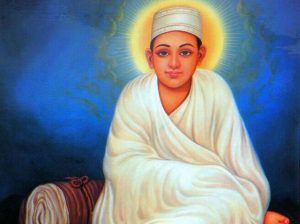 INTRODUCTION
Dadu Dayal (1544—1603) was a great saint from Gujarat, India, who belongs to Sant Mat. His gurus were Kabirdas, Ravidas and Namdev. His famous work was Dadu Anubhav Vani.
He shifted his place to Rajasthan, and with a group of followers he founded a sect known as Dadupanth.
This organization is still functioning in Rajasthan, and the songs composed by Dadu have been preserved properly for the benefit of future generations.
His disciples Rajjab and Janagopal wrote his biography which tells the importance of Dadu Dayal.
He believed that devotion to God should not be restricted to particular religion alone. And the power of the god is scattered everywhere. Doing goodness to others and developing proper habits alone will yield good results for the people.
His famous teachings are as follows:
1. Don’t cause harm to anybody, since everything is created by the god.
2. Always tell truth and act honestly. Since with our good karmic deeds only, we can attain SALVATION.
3. Work hard and earn money. Don’t cheat others.
4. Show kindness to each and every living being.
5. Always do some kind of charity work, since it will please the god.
6. Don’t get interested in worldly pleasures, since it will not last long.
7. Respect your parents, take care of them and provide proper food in their old age.
8. Believe that god is dwelling in your heart itself. And realize the inner self and fill up your soul with full of spiritual energy.
9. Do not blame on god in case of difficult situations, since god will always do only good to you.
His disciples set up ashrams, around the region in order to spread the religion. Saint Dadu had spent his later stage of his life in Rajasthan.
ASHRAMS
1. Naraiana
2. Bhairanaji
3. Sambhar
4. Amer
5. Karadala

IMPORTANCE
He is a pious and a holy man who followed a separate sect and worshipped the god in a different way, without any form. His teachings were attracted by large number of people, and they became his followers. He lived a noble life and was a humble and a straight forward person.
Though he followed a separate sect, he was not against any other religion. He respected all the religions and moved in a proper manner with other religious people. He also cured the physical and mental diseases of the people, and made them to live happily and comfortably.
He attained SAMADHI at the age of 59 in the year 1603 at a village in Rajasthan.