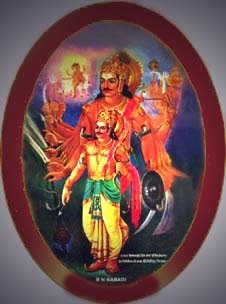 Katamaraju was born in the Yadava community, and served as a king in a village at Andhra Pradesh, and captured his nearby regions due to his great warfare and braveness. He ruled his region in a proper manner, and provided all the facilities to the people, and his people were worshipped him as their god. During his reign, there were no drought, no famine and no dry situation prevailed in his region. All the people were lived happily and peacefully throughout their life. It is believed that he lived during the 13th century and given a golden rule to the people. He constructed Annadan shelters and resting places for the travellers, and also provided free food to the poor and the needy.

He took care of the women in a proper manner, and given much respect to them, and treated them as an aspect of Mata Kali. He also provided proper training to them in agriculture and given them work in agriculture fields and looked after them properly. Apart from his people, he was praised by kings in other states, and also by the demi gods in the heaven, for his good nature.

He contains good knowledge in all kinds of art, and learned the Hindu scriptures and other sacred texts and lived as per the guidelines of the divine texts. During his reign, no one has suffered from poverty, diseases, miseries and sorrows, since he is considered be an incarnation of Lord Shiva.

Let us worship the great gods and be blessed.