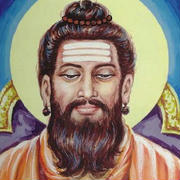 Nijaguna Shivayogi (15th century AD) was a great saint and a devotional writer in the Kannada language. He was a follower of Lord Shiva, and he was the ruler of a small region in Mysore. His famous text Vivekachintamani, was written in a simple style and it was stolen the hearts of thousands of readers during his period.

The holy text Vivekachintamani, contains astronomy, medicine and spirituality. He also wrote texts in praise of the great Shaivite saints, and he was highly appreciated for his notable works. His other works include:

Though he was a ruler of the kingdom, he lived a simple life, and spent most of his wealth for feeding the Shiva devotees.  Similar to the Nayanar Saints, his Shiva Bhakti was very strong, and he had done lot of good activities like renovation of ancient Shiva temples, conducting Shiva pujas and taking care of the families of the Shiva Priests etc.

His famous quotes are as under: