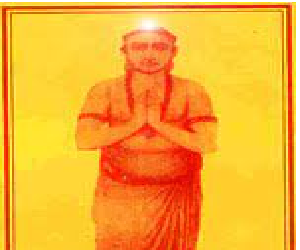 Shivagnana Swamigal, who is also fondly called by his devotees as Shiva, was a great saint, who lived in a village in Tamil Nadu, before few hundred years.

He was a famous astrologer, and wrote lot of spiritual and astrology books, which is still helpful for the people. He was a staunch devotee of Lord Shiva, and wrote lot of bhakti poems on Shiva, and also sung it in front of Shiva Temples. His honey filled up songs mesmerised the Shiva devotees, and hence he was praised by the people. Similar to Sri Sadhashiva Brahmendrar, he has sacrificed his life for propagating Shaivism, and also healed the diseases of the people, and relieved them from their sins. He also performed lot of miracles in front of the kings, and received great appreciation from them.

Shivagnana Swamigal was born to a pious Brahmin couple, and he was nicely brought up by them. His father served as a priest in a Shiva Temple, and hence he used to consume the holy Milk Prasadam from his childhood onwards, and due to that, he has become a hale and healthy person, and also got good knowledge in Vedas and Shastras on his own, even without learning it from anyone. He also assisted his father in his Shiva Puja, like plucking of flowers from the flower gardens, Milk Bathing of Shiva Lingam and decorating the deities present in the temple etc.

Once he got the divine vision of Sri Thirumoolar, and as per his advice, he went on a pilgrimage to various Holy Shiva Temples like Kashi, Somnath, Srisailam and Kedarnath. He met Rishi Agastiya in the Himalayan Mountain, and after getting his divine blessings, divine knowledge began to pour from his mouth, and he began to glorify Lord Shiva, by writing lot of Shaivite texts in palm leaf manuscripts. He must have to be considered as a Nayanmar saint, due to his great Shiva Bhakti. He used to chant Sri Rudram and Chamakam while bathing in the Holy Rivers, and lived a very pious and a saintly life.

After his death, he has attained salvation and merged with Lord Shiva.

2021-05-28
Previous Post: Sindoor Hanuman
Next Post: Netflix refuses to back out of “Record of Ragnarok” despite Hindu protest saying it trivializes Lord Shiva