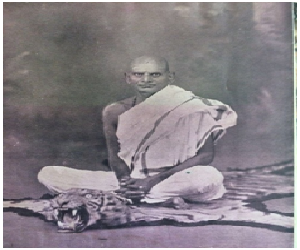 Sri Guhananda Swamigal(20th century AD) was born in a village in Tamil Nadu. He was an ardent devotee of Lord Muruga, and as per the advice of his Guru Vallimalai Sri Sachidananda Swamigal, he began to regularly sing songs on Thirupugazh, which was written by the great Saint Sri Arunagiri Nathar. He maintained good relationship with the then pontiff of Sringeri and with Sri Chandrasekhara Saraswathi Swamigal of Kanchipuram Mutt.

He used to wear simple clothes like cotton dhoti and used to put a dhoti on the upper side of his body. He received many awards due to his mastery in penning wonderful poems on Lord Shiva and Muruga. He travelled throughout Tamil Nadu, and visited lot of temples.

His birth name was Adiseshaiyer. He has explained his relationship with Sri Vallimalai Swamigal in the form of an article. Both of them were met during the year 1927 at Anaiyampatti, and thereafter they met several times in Sri Pasupadeeswarar Temple at Karur. Swami appears similar to ancient Shaivite saint, and a divine smile would always be present with him. He also spent most of his time in visiting Shiva temples, and sung excellent songs on him. Due to his Shiva Bhakti, people began to gather in front of him, and many of them were become his sincere disciples.

Some of his wonderful teachings are as follows:-