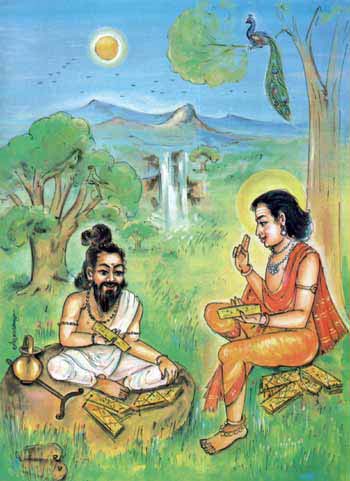 Kanda Puranam is the Tamil version of the Sanskrit version Skanda Purana. It was written by the great saint Sri Kachiyappa Sivachariyar at Kumara Kottam at Kanchipuram. He lived during the 10th century AD at Kanchipuram. He was a Shaivite saint, and at his young age itself, he was deeply interested in spirituality, and studied the sacred Shaivite texts.

Once, he had a dream, and in that, Lord Muruga had appeared, and asked him to translate the Sanskrit version of Kanda Puranam in Tamil language. After waking up from the bed, Sivachariyar’s mind was filled with full of joy, and he began to write his holy work at Kumara Kottam Murugan Temple. It is believed that Lord Muruga itself appeared before him while writing the divine text, and clarified the doubts of Sivachariar.

The Kanda Puranam written by him is considered as one of the marvellous texts, which serves as the main base for the Muruga Devotees. It contains the details happened in the life of Lord Muruga, about his birth, miracles performed by him, killing of the fierce demons, and safeguarding the earth and the heaven from the clutches of the evil forces.

Sri Sivachariyar healed the diseases of the people, and developed the Muruga Bhakti among the people. Through his great text “Kanda Puranam”, he was praised by the great kings and the general public, and he was given lot of wealth for his famous contribution in Tamil literature.

Sivachariyar had donated his wealth for constructing temples and also renovated the ancient temples. After living a holistic life for several years, after his death, he reached the abode of Lord Muruga, the Skanda Loka, and it is believed that, he is still living in the Skanda Loka by performing meditation and singing songs on Lord Muruga.