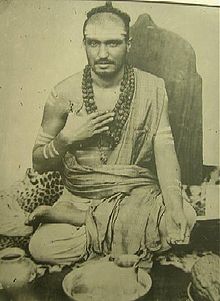 Swami Vamanashram was one of the holy gurus of the Chitrapur Saraswat Brahmin community. He occupied in the pontiff seat from 1823 to 1839 in the Chitrapur Mutt situated at Uttara Kannada District at Karnataka.

Swami Vamanashram had been trained under his guru Swami Keshavashram for several years, and due to that, he has become a master in the Vedas, Upanishads and Hindu scriptures. He was considered as a holy saint, and he died in the year 1839 at Mangalore. His successor was his disciple Sri Krishnashram. The Samadhi shrine of Swami Vamanashram is located at Mangalore.

Swami Vamanashram was born in a pious Bhat family in Mangalore. Swamiji contains spiritual powers, due to his sincere bhakti on Lord Shiva. He also gave some of his official duties to the Mutt managers, and he went on holy pilgrimages, and visited many shrines of Lord Shiva.

Swamiji didn’t like worldly pleasures, since he was considered as a born saint, and he lived a pious and a holy life throughout in his life.

His Samadhi shrine is situated at Mangalore. Devotees offer various pujas and Sevas to him. It is believed that he still resides at his Samadhi shrine, and blesses his devotees in a pleasing manner.