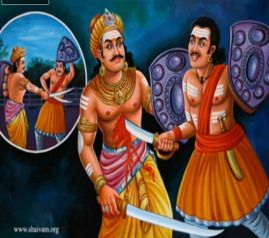 Yenathinathar was a Nayanar  saint and a great shiva bhakta and considered as one among the 63 Nayanars.

Yenathinathar was born in Kumbakonam  of Tamil Nadu. He was a brave and a good swordsman and served as an army general in the Chola kingdom. He was a rich person and provided food to the poor and to the devotees of Lord Shiva.

Atisuran also a swordsman became jealous of Yenathinathar brilliance in handling weapons and was defeated by Yenathinathar in competition. He took revenge on Yenathinathar and made a plan to kill him.

One day morning, Atisuran invited Yenathinathar to a place for competition. Atisuran applied sacred ash all over his body and appeared in front of Yenathinathar. Yenathinathar does not want to fight with him, since he applied the sacred ash in his body, and decided to die. He was attacked by Atisuran and fell down on the ground. Lord Shiva appeared before him and granted him SALVATION.

Yenathinathar is worshipped in the Tamil month of Purattasi, and also worshipped as a nayanmar along with other nayanmars in the shiva temples.