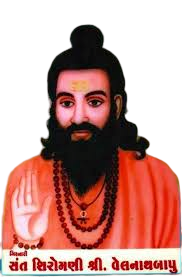 Bapu Velnathji Thakor also called as Sant Velnathji Thakor was a holy saint of Gujarat. He was the grandson of Amarji Thakor who was king of a small region in Gujarat. Bapu was a holistic man who used to do meditation in the holy mountain caves. He was an ardent devotee of Lord Shiva, and due to his bhakti, once he had the Shiva Darshan. Though he was born in a rich royal family, due to his spiritual thirst, he left the palace, become a saint and lead a simple and noble life.

Bapu was considered as the holy incarnation of Lord Nandi Bhagavan, and he had taken the avatar to initiate the Shiva Bhakti in the minds of the people. He wants the people to enjoy the everlasting bliss, and he repeatedly asked his devotees to keep their thoughts on Shiva and to recite his holy mantras and holy names.

His teachings are easy to follow, and his preaching is based on the greatness of Lord Shiva.