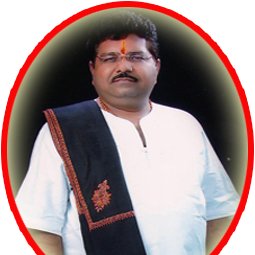 Saint Murlidhar  Maharaj was born in the year 1970, in a village in Gujarat, in a pious Hindu family.  In his childhood itself, he got the blessings of the great saint Shri Jamnadas Ji Maharaj. He completed his school education at his native place, and finished his graduation in Jodhpur.
Maharaj was a great devotee of Rama and Krishna and used to sing bhakti songs on Lord Ram and Krishna and also used to perform lectures on Ramayan, Srimad Bhagavatham and Bhagavat Gita. He used to narrate the incidents from the divine texts in a simplified manner, and people would become the character itself, while he was narrating the scenes from the holy texts during his discourses.

Apart from singing and giving religious discourses, he used to do lot of social services such as giving the basic necessities to the poor people, and educating the poor children etc. Currently he is living in Jodhpur and doing his spiritual service in a good manner. He is a selfless person, who has dedicated his life towards inculcating the bhakti in the minds of the people, and to make them perfect and pure in their life.

Let us praise the noble man and be blessed.