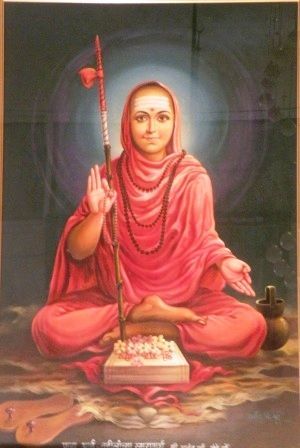 Narasimha Saraswati (1378−1459) was an Indian saint and considered to be an avatar of Lord Dattatreya. His birth name was Narahari. His life history was written by Sri Saraswathi Gangadhar in his book Shri GuruCharitra.

Narasimha Saraswati was born in a Brahmin family in Maharashtra.

Narasimha Saraswati was able to speak only during his Upanayanam(Thread ceremony). He started reciting the Vedas only after his Upanayanam. At a younger age itself, he was well versed in vedas and sacred texts of Hinduism.

He went on a pilgrimage to Kashi at the age of eight.

He took Sanyasa at Kashi from Shri Krishna Saraswati. From then onwards, he was called as “Narasimha Saraswathi”.

He visited several holy places and settled in Gangapur,Karnataka.

At the end of his life, he attained samadhi in Kadali vanam,near srisailam.

His famous disciples are as follows:-

Narasimha saraswathi swamiji has lived a saintly life during his period. He has helped the people through his grace, and cured the diseases of his devotees and removed the problems in their life through his spiritual powers. He was a very simple and honest saint, who always worship god and chants his name. His teachings are based on doing good things to the people, and providing food to the needy, and treating all the living beings as equal and showing kindness on them.

Sri Narasimha saraswathi being an avatar of Lord Dattatreya, has dedicated his entire life towards teaching and guiding the people in a proper manner, and taking them to the spiritual path through devotion. He was an eminent scholar and a master in all spiritual subjects. He is the saviour who has come to this earth to rescue us from our sins. It is also believed that devoting to the spiritual guru will give immediate good results, than devoting to the god. Hence let us pray to him and be blessed.