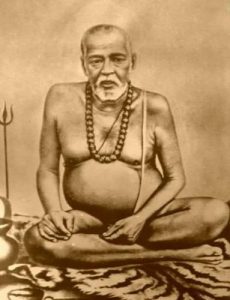 INTRODUCTION
Bamakhepa (1837–1911) was a Hindu saint, and a great devotee of goddess Tara, and a regular worshipper at Tara temple in Birbhum, west bengal. His birth name was Bamacharan Chattopadhyay. He was madly devoted to goddess tara devi, and also fondly known as the mad saint.
LIFE
He worshipped Mata Tara as a holy mother. He was born in a village of Birbhum district, West Bengal.He lived near the temple of Tara Devi, and was good at meditation and yoga. He was also treated similarly to saint Ramakrishna, with regard to their bhakti on the holy mother.He left his house at a younger age, and became a disciple to the great saint named Swami Makshadananda.After some time he went Mouliksha temple, Jharkhand and continued his worship of Holy Mother.

IMPORTANCE
He was a perfect yogi who cures the illness of the people, and gives mental satisfaction to them. It is said that Bamakhepa was first fed the temple prasadam, and then only it will be offered as Naivediyam (Bhog Prasad) to Tara Devi. It is believed that once the goddess appeared to Bamakhepa and blessed him.He was a great spiritual master who surrenders his heart and soul to the goddess with utmost devotion and faith on her. He also conducted spiritual meetings and told the importance of worshipping Tara devi, and solved the problems of the people.He insisted his followers to chant the Devi mantra continuously in order to attain all kinds of prosperity in their life. He was considered as a holy saint by his followers. He lived a saintly life, and had taken only simple food, and never gets angry over others, and gives remedy to the problems in the life of his devotees. He reduced the sins of his devotees, by praying to the divine mother.

He also done many charitable activities, and conducted annadanam and gave clothing and shelter facilities to the poor to his level best. He also donated the wealth to the poor, which was given to him by the rich people.

He is still remembered due to his sincere bhakti on Mata Tara Devi.
He died at the age of 74 at West Bengal.
His temple is situated at Maluti village, Jharkhand.