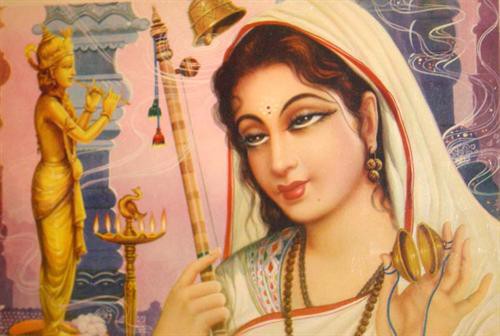 INTRODUCTION
Daya bai (18th century AD) was born in a pious Hindu family at a village in Rajasthan. After hearing the stories of Lord Krishna from her mother, she was devoted to Lord Krishna at her childhood itself. She used to chant the names of Lord Krishna, and visit the nearby temples and perform bhajans and praise his glories and gave lectures on Bhagavatham and Bhagavat Gita. Due to her sincere devotion on the god, she didn’t marry, and dedicated her entire life towards worshipping Krishna.
After attaining teenage, she heard about Swami Charandas and become his disciple. Swami Charan das was a great devotee of Lord Krishna, and gave warm welcome to her at his ashram, and provided proper food, and shelter and looked after her like his own daughter.
In course of time, she become the successor of Charan das and began to spread the bhakti spirit among the people, and done lot of social welfare activities for the benefit of the poor people. She also written a sacred text known as “DAYABODH”, and she died in Bithoor, Uttar Pradesh. It is believed that after her death, she has reached the abode of Lord Vishnu, the Vaikunta.
Let us worship the noble saint and be blessed.
“OM SRI DAYA BAI NAMAHA”
“JAI KRISHNA”
“JAI RUKMANI MATA”
WRITTEN BY
R.HARISHANKAR