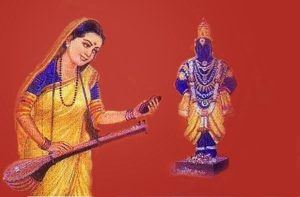 INTRODUCTION
Kanhopatra was a 15th-century saint and was born at Pandharpur. She was a great devotee of Lord Vithoba (A form of Lord Krishna).
LIFE
Kanhopatra was a dancer in the royal palace of the king of Bidar. Since she doesn’t want to attract others through her beauty and to be a slave of the king, she preferred to surrender at the feet of Lord Vithoba.
IMPORTANCE
Through her poems, she tells that she wanted to be a slave for Lord Vithobaalone, and he alone is her savior and wants to free herself from her dancing profession. Still, her poems are continued to be sung even today. She has attained sainthood without any guru and considers Lord Vithoba as her Guru and her God.
Being a dancer, she was not interested in herself to be gifted to others. Through her poems, she says, I am a devotee of Lord Vithoba, and he is my Lord. Let me completely surrender me to the Lord’s lotus feet, and let me continuously worship him forever.
Death
According to texts, it is told that Kanhopatra merged with the image of Vithoba, and some texts tell us, that she fell at the feet of Vithoba and died. But everybody accepts she has attained the divine abode, through the grace of Lord Vithoba.
CONCLUSION
Although a dancer by profession, she was fully devoted to Lord Vithoba. She was not attracted by money or by any otherworldly pleasures. She was attracted only with Lord Vithoba. Due to her pure devotion, she reached the divine abode. Through her bhakti, she has become a saint. Let us pray to her and be blessed.
“OM SREE KANHOPATRAVE NAMAHA”
“OM SREE PANDURANGA VITTALA NAMO NAMAHA”
WRITTEN BY
R.HARISHANKAR