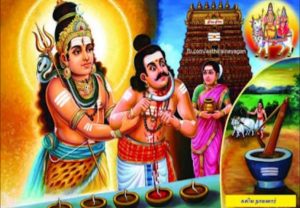 INTRODUCTION
Kaliya Nayanar, is a Nayanar saint, and belonged to Shaivism sect. He is one among the 63 Nayanars. He is an ardent devotee of Lord Shiva.
LIFE
Kaliya Nayanar was an oil merchant, and lived in Thiruvottriyur. He was a regular worshipper of Lord Shiva at the Thyagaraja Temple, Thiruvottriyur.
Kaliyan was a rich person. He used to serve Lord Shiva by lighting the lamps in the temple. Due to his continuous service, in course of time, his wealth had diminished. However, he continued his service by working as a labourer for purchasing the oil. In course of time, he has lost his job also. Finally, he decided to kill himself, since he was unable to purchase the oil for lighting the lamps in the temple. He tried to cut his throat, but he was stopped from doing that act by Lord Shiva by giving an appearance to him with Parvati and blessed him and given a permanent place in Kailash.
In the tamil month of Adi, Kaliya Nayanar is worshipped. He also worshipped as one among the 63 Nayanars.
IMPORTANCE
He tried to lose his life, since his service to Lord Shiva was interrupted. He had lost all of his richness in his life, and continued doing service to Lord Shiva. Apart from supplying oil to Shiva temple, he also performed annadanam to the shiva devotees at the Thiyagaraja Swamy Temple, Thiruvottriyur. He has done service to Lord Shiva as well as to his devotees. Though, he was a rich person, he never thought about comforts and luxuries. He thought only about doing dedicated service to Lord Shiva and to his devotees.