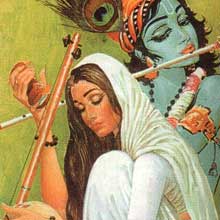 INTRODUCTION
Sahajo Bai (1725-1805) was born in a pious Hindu family in a village at Delhi. She got married at a younger age, and her husband was died immediately after marrying her.  Due to that, she had lost interest in family life, and preferred to become a saint and become a disciple of Saint Charandas, and concentrated her entire attention towards devoting on Lord Krishna, and forgets about everything in the world. She got great knowledge from her guru, and learnt all the divine scriptures. She died on 1805 in Vrindavan, and reached Vaikunta.
TEACHINGS
1. Believe in Lord Krishna, and put your entire burdens in his lotus feet, and peacefully do your duties.
2. Lord Krishna is everywhere and he resides in each and every living being. He is the creator, protector and the destroyer.
3. Chant the glories of Lord Krishna, and read the Bhagavatham and Bhagavat Gita, in order to get enlightenment in life.
4. Krishna is the only medicine for our diseases, and by worshipping him frequently, and by consuming his divine Prasad, all the dreaded diseases would run away from our body.
5. Don’t waste even a single moment without chanting Lord Krishna’s names.
6. Don’t show too much attention on earning money, since it would never come with you after your death, and do some kind of charity activity with your surplus money.
7. Don’t commit sins and don’t suffer in your life.
8. Don’t think about unnecessary and unwanted things and waste your time, instead of that, meditate on Lord Krishna, and gain more spiritual power through that.
9. Show mercy on all the living beings in the earth, and provide food to the people, animals, birds and insects.
Let us worship the holy saint and be blessed.
“OM SRI SAHAJO BAI NAMAHA”
“JAI KRISHNA”
“JAI BALRAM”
WRITTEN BY
R.HARISHANKAR