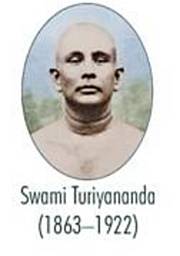 INTRODUCTION
Swami Turiyananda also called as Hari nath and Hari Maharaj due to his sincere devotion on god Hari, and he was the popular disciple of Ramakrishna. He was a close associate of Swami Vivekananda, and due to his request, he went to foreign countries, and preached the holiness of Hinduism among the people.  He established Ashrams in foreign countries, and spread the bhakti spirit among the masses.
Turiyananda was born in a pious Bengali Brahmin Orthodox family in Kolkata in the year 1863. He lost his parents at his young age and he was brought up by his brother. He successfully completed his studies, and studied holy texts like the Bhagavad Gita, Bhagavatham, Puranas and Vedas.
Harinath met Ramakrishna at his younger age, and used to visit the Dakshineswar temple frequently. Due to the saying of Sri Ramakrishna he began to see all the women in the form of the Divine Mother Kali Devi, and gave great respect to them. Ramakrishna got high opinion on him and frequently praises his good nature.
He also used to interact with Swami Vivekananda about spiritual matters, and spend lot of hours in doing meditation. He went to foreign countries along with Swami Vivekananda and gave his full support to him. At his final stage of life, he served in the Ramakrishna Mission Sevashram in Varanasi, and died in the year 1922.
Let us worship the great saint and be blessed.
“OM SRI TURIYANANDARE NAMAHA”
“OM SWAMI VIVEKANANDARE NAMAHA”
“JAI KRISHNA”
WRITTEN BY
R.HARISHANKAR