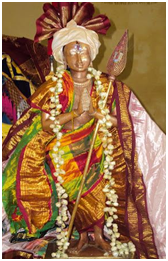 INTRODUCTION
Thirumangai Alvar is one of the 12 Alvars of South India. His birth name was Kaliyan. He was an excellent poet and a knowledgeable saint. He was born in 2702 BC. He is considered as an incarnation of Vishnu’s bow.
LIFE
Thirumangai Alvar was born in a small village in Tamil Nadu. He worked under the Chola king as Military Chief. In praise of his bravery, he was rewarded a small region by the king, known as Thirumangai. From then onwards, he was called as Thirumangai Alvar. He was a great devotee of Lord Vishnu.
He married a girl with the name Kumudavalli. She has laid a set of conditions to him, stating that he must become a vaishnavite, and that he must feed at least for a thousand people for about a year, every day. Since he was under financial stress, he decided to do the robbery. One day, he saw a marriage party group with the bride and groom. He decided to steal the ring from the groom, but he was unable to pick it from him. Then he realized that the bridegroom was Lord Vishnu. Vishnu then taught the mantra “OM NAMO NARAYANAYA”, from then onwards he became a great saint.
IMPORTANCE
Thirumangai alvar spread bhakti among the people, and insisted them to worship Lord Vishnu, by chanting his names, in order to attain SALVATION. He was a great warrior, and possessed all the requisite skills, and was a master in all the arts. Due to his sincere devotion on Lord Vishnu, he has become an Alvar. He is living in Vaikunda and serving to Lord Vishnu along with other alvars.
DEVOTIONAL WORKS
He composed several poems in DivyaPrabandham. And his other works include:-

Temples
A temple was dedicated to him at Hampi Vittala temple complex, which is situated at Karnataka.
Festival
The Thirumangai Alvar utsavam will be celebrated in the Vishnu Temples in a grand mannerin the Tamil month of Thai.
CONCLUSION
Thirumangai Alvar who was a great devotee of Lord Vishnu has attained the lotus feet of Lord Vishnu. Let us worship him and be blessed.
“OM SREE THIRUMANGAI ALVARE NAMAHA”
“OM NAMO NARAYANAYA NAMAHA”
WRITTEN BY
R.HARISHANKAR