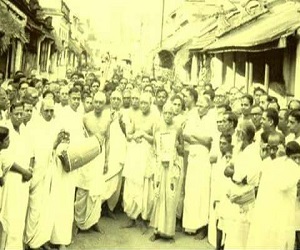 In ancient times, Unjavriti would be taken by certain sects of Brahmin saints and scholars as a method of observing simplicity in their life. The great saint Sri Thyagaraja, a divine composer of Carnatic Music used to take Unjavriti, and he used to sing devotional songs on Lord Rama by playing the tambura.

Unjavriti Brahmins would visit the nearby streets and used to sing melodious songs in front of the houses, in order to inform their presence. Generally, in most of the houses, the women members would make an affectionate smile at them, and provide sufficient food grains in their bags or vessels. They would consider the Unjavriti Brahmins as the divine messengers of the almighty, and treat them with great respect.

Even today people belonging to some holy mutts used to sing wonderful songs on Lord Hari, and used to receive the offerings from the people for celebrating the anniversaries and birth day functions of the divine saints. In the present day situation, most of the Unjavriti Brahmins are not demanding, and they would not also stand before the houses. If they are recognised by the people, and if the people are willing to offer them either in cash or in kind, they would accept it, or otherwise they would return to their places                           with empty hands. Some people would gather and eat the scattered grains in the paddy fields along with their family.

The system of Unjavriti is adopted since ancient times, and in the great epics Mahabharata and Bhagavatham, the Unjavriti practice is mentioned.
According to Vedic tradition, the practice of seeking alms is the main requirement for leading the life of a saintly bachelor.

When a student follows the path of Sanatana Dharma, and if he aspires to become a saint, he has to get his food by begging alms from the residents of his locality. Such a system is followed to remove the ego or pride from the minds of the people. Unjavruthy is a great Bagavatha Dharma, and donating food to the Bagavathas is equivalent to donating food to the Bhagavan.