Acharya Sushruta was the son of Sage Vishwamitra. He was recognized as a genius in the annals of Indian medical science.

Sushruta details the first ever surgical procedures in the Sushruta Samhita, 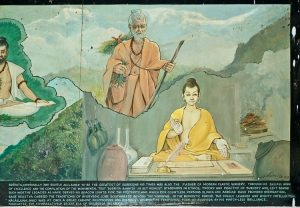 Acharya Sushruta is venerated as the father of surgery and the science of anesthesia. When surgery was in its infancy in Europe, Sushruta was performing rhinoplasty (restoration of a damaged nose) by using skin of the cheek. In the Sushruta Samhita, he prescribes treatment for twelve types of fractures and six types of dislocations. His detailed descriptions of garbhavyakranam or human embryology are simply amazing. Sushruta used 125 types of surgical instruments including scalpels, lancets, needles, catheters and rectal speculums; mostly designed from the jaws of animals and birds.” He has also described a number of stitching methods, one of which is the use of horse’s hair and the fibers of bark as thread. In the Sushruta Samhita, he details 300 types of perations. The ancient Indians were pioneers in amputation, caesarean and cranial surgeries and other operations like removal of cataract, hernia, lithotomy (surgical removal of stone from bladder, kidney or urinary tract) and others. Sushruta classified all surgical procedures into eight kinds, namely, aharya (extractions of solid bodies), bhedya (excising), chhedya (incising), eshya (probing), lekhya (scarifying), siviya (suturing), vedhya (puncturing) and uisrauya (evacuating fluids).”

“The portion of the nose to be covered should be first measured with a leaf. Then a piece of skin of the required size should be dissected from the living skin of the cheek and turned back to cover the nose keeping a small pedicle attached to the cheek. The part of the nose to which the skin is to be attached should be made raw by cutting the nasal stump with a knife. The physician then should place the skin on the nose and stitch the two parts swiftly, keeping the skin properly elevated by inserting two tubes of eranda (the castor-oil plant) in the position of the nostrils so that the new nose gets proper shape. The skin thus properly adjusted, it should then be sprinkled with a powder of liquorice, red sandal-wood, and barberry plant. Finally, it should be covered with cotton and clean sesame oil should be constantly applied. When the skin has united and granulated, if the nose is too short or too long, the middle of the flap should be divided and an endeavor made to enlarge or shorten it. (Sushruta Samhita, I.16)”

Even the concept of Rhinoplasty was newely discovered in ancient India, which was withstood by rhinotomy (amputation of the nose). Back then it was the mark of imposition and punishment, practiced over convicts and prisoners to punish them or scar them. Hence the reconstructive surgery was the revolution with which all these problems even if someone is innocent were abolished.