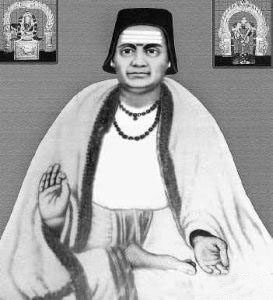 Born to a Brahmin family in the Sahyadri region of Maharashtra, Bhaskaracharya’s work in algebra, arithmetic and geometry catapulted him to eternal fame. He was a great mathematician and astronomer of the 12th century. He discovered gravitation and invented calculus, more than 500 years before Isaac Newton (1647-1727 CE).

A popular story says that his seminal work, The Lilavati was written to console his daughter. As per her strange astrological chart, the muhurta (auspicious moment) for her marriage would come only on one day of her life. She could, thus marry, only that particular day and never before or after. But due to unforeseen circumstances, the muhuruta passed and she could not be married. The fond father assured his heartbroken child that he would try to make up for her profound loss: by naming a book after her, a book that would enshrine her name forever.

Apart from the Lilavati, his major mathematical works are- Siddhantashiromani, Karana-Kutuhala, Bijaganita. Their translations into several languages of the world bear testimony to his eminence. He wrote his treatise, the Siddhanta Shiromani, when he was 36 years old (0150 CE). It is divided into four parts. The first part is also known as Lilavati. It deals with units, numerals (ten,hundred and up to parardha – 1017), addition, subtraction, multiplication, division, square roots, cubes and cube roots. It also deals with fractions, zero and other aspects. The second part has come to be known as Btjaganita, which is a very systematic treatise on algebra.

Bhaskaracharya, also known as Bhaskara, mentions in both Lilavati and Bijaganita that zero added to a quantity or subtracted from a quantity does not change the number. He adds that any quantity multiplied by zero or zero multiplied by any quantity would yield zero. Similarly zero divided by any quantity would also give zero. But any quantity divided by zero would give infinity. Bhaskara describes equations of the first degree, quadratic equations and equations of higher degrees. Other chapters of Siddhantashiromani deal with the subject of astronomy. His works fired the imagination of Persian and European scholars, who through research on his works earned fame and popularity.

A proof of the Pythagorean theorem by calculating the same area in two different ways and then canceling out terms to get a2 + b2 = c2.

Integer solutions of linear and quadratic indeterminate equations (Kuttaka). The rules he gives are (in effect) the same as those given by the Renaissance European mathematicians of the 17th century

A cyclic Chakravala method for solving indeterminate equations of the form ax2 + bx + c = y. The solution to this equation was traditionally attributed to William Brouncker in 1657, though his method was more difficult than the chakravala method.

The first general method for finding the solutions of the problem x2 − ny2 = 1 (so-called “Pell’s equation“) was given by Bhaskara II.

Solutions of Diophantine equations of the second order, such as 61×2 + 1 = y2. This very equation was posed as a problem in 1657 by the French mathematician Pierre de Fermat, but its solution was unknown in Europe until the time of Euler in the 18th century.

Solved quadratic equations with more than one unknown, and found negative and irrational solutions.

Preliminary concept of mathematical analysis.
Preliminary concept of infinitesimal calculus, along with notable contributions towards integral calculus.
Conceived differential calculus, after discovering the derivative and differential coefficient.
Stated Rolle’s theorem, a special case of one of the most important theorems in analysis, the mean value theorem. Traces of the general mean value theorem are also found in his works.

More specifically the contents include:
Definitions.
Properties of zero (including division, and rules of operations with zero).
Further extensive numerical work, including use of negative numbers and surds.
Estimation of π.
Arithmetical terms, methods of multiplication, and squaring.

Indeterminate equations (Kuttaka), integer solutions (first and second order). His contributions to this topic are particularly important, since the rules he gives are (in effect) the same as those given by the renaissance European mathematicians of the 17th century, yet his work was of the 12th century. Bhaskara’s method of solving was an improvement of the methods found in the work of Aryabhata and subsequent mathematicians.

His work is outstanding for its systemisation, improved methods and the new topics that he has introduced. Furthermore the Lilavati contained excellent recreative problems and it is thought that Bhaskara’s intention may have be.

Trigonometry
The Siddhanta Shiromani (written in 1150) demonstrates Bhaskara’s knowledge of trigonometry, including the sine table and relationships between different trigonometric functions. He also discovered spherical trigonometry, along with other interesting trigonometrical results. In particular Bhaskara seemed more interested in trigonometry for its own sake than his predecessors who saw it only as a tool for calculation. Among the many interesting results given by Bhaskara, discoveries first found in his works include the now well known results for sin(a + b) and sin(a – b)

Calculus
His work, the Siddhanta Shiromani, is an astronomical treatise and contains many theories not found in earlier works. Preliminary concepts of infinitesimal calculus and mathematical analysis, along with a number of results in trigonometry, differential calculus and integral calculus that are found in the work are of particular interest.
Evidence suggests Bhaskara was acquainted with some ideas of differential calculus. It seems, however, that he did not understand the utility of his researches, and thus historians of mathematics generally neglect this achievement. Bhaskara also goes deeper into the ‘differential calculus‘ and suggests the differential coefficient vanishes at an extremum value of the function, indicating knowledge of the concept of ‘infinitesimals‘.
There is evidence of an early form of Rolle’s theorem in his work

• If f (a) = f (b) = 0, then f ‘ (x) = 0 for some x with a<x • He gave the result that if x =(approx) y then sin(y) – sin(x) =(approx) (y-x) cos(y), thereby finding the derivative of sine, although he never developed the notion of derivatives.
Bhaskara uses this result to work out the position angle of the ecliptic, a quantity required for accurately predicting the time of an eclipse.

In computing the instantaneous motion of a planet, the time interval between successive positions of the planets was no greater than a truti, or a 1⁄33750 of a second, and his measure of velocity was expressed in this infinitesimal unit of time.

He was aware that when a variable attains the maximum value, its differential vanishes.

He also showed that when a planet is at its farthest from the earth, or at its closest, the equation of the centre (measure of how far a planet is from the position in which it is predicted to be, by assuming it is to move uniformly) vanishes. He therefore concluded that for some intermediate position the differential of the equation of the centre is equal to zero.
In this result, there are traces of the general mean value theorem, one of the most important theorems in analysis, which today is usually derived from Rolle’s theorem. The mean value theorem was later found by Parameshvara in the 15th century in the Lilavati Bhasya, a commentary on Bhaskara’s Lilavati.

Madhava (1340–1425) and the Kerala School mathematicians (including Parameshvara) from the 14th century to the 16th century expanded on Bhaskara’s work and further advanced the development of calculus in India.

Astronomy
Using an astronomical model developed by Brahmagupta in the 7th century, Bhaskara accurately defined many astronomical quantities, including, for example, the length of the sidereal year, the time that is required for the Earth to orbit the Sun, as 365.2588 days which is same as in Suryasiddhanta. The modern accepted measurement is 365.2563 days, a difference of just 3.5 minutes !

The second part contains thirteen chapters on the sphere. It covers topics such as:
Praise of study of the sphere.
Nature of the sphere.
Cosmography and geography.
Planetary mean motion.
Eccentric epicyclic model of the planets.
The armillary sphere.
Spherical trigonometry.
Ellipse calculations.
First visibilities of the planets.
Calculating the lunar crescent.
Astronomical instruments.
The seasons.
Problems of astronomical calculations.