In: Scientists Rishi
With: 0 Comments 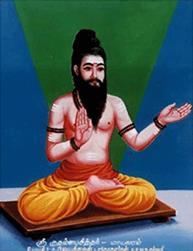 INTRODUCTION
He is one among the siddhas, and born in the Yadava community, and was greatly devoted to Lord Krishna from his childhood. He was a great siddha physician and contains an expert knowledge in the concepts of siddha medicine, and rendered great works on siddha. He learned the Siddha Science at his younger age itself from various scholars and siddhas.
He was interested to journey in the path of Siddhas and moved towards the spiritual path. His teachings are highly valuable for the entire universe. His songs are highly praised by the people, which mainly based on the yogic path.
He attained samathi at Mayiladuthurai in Tamil Nadu.

IMPORTANCE
From his childhood days, instead of playing with other boys, he concentrated his attention on praying to Lord Krishna and Shiva, and was deeply involved in meditation on them. He was highly praised for his great contributions in the field of siddha medicine. Siddha physicians are highly benefitted through his great works on siddha medicine.
He also removed the difficulties of the people, and made them to walk in the correct path. He was also well versed in all the divine subjects and contains good knowledge, wisdom, courage, boldness and devotion towards god.
During his life time, he moved with his followers and with the common people in a lovable manner. He never finds any fault with others, and always treated the people as the god’s creations, and respected everyone in a proper manner. He also cured the diseases of the people and cleared their sins and invoked them in the bhakti path. He removed the bad habits of the people, and encouraged them to develop good habits, by doing constant worship on god. He has done many miracles in the life of his devotees.
Let us worship him and be blessed.
“OM SREE KUTHAMBAI SIDDHARE NAMAHA”
“OM NAMAH SHIVAYA”
“OM SAKTHI PARASAKTHI”
WRITTEN BY
R.HARISHANKAR