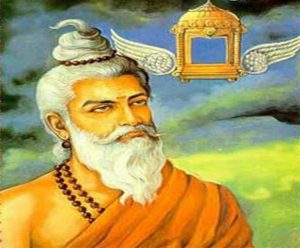 Bharadwaja rishi is said to have authored the Yantra Sarvasva, which means “all about machines”. It is not available today, but it is believed to have consisted of one hundred topics and 500 sutras. In the Vaimanika chapter, he deals with aeronautics.

While there is no physical evidence today that utmanas (flying machines) existed in ancient India, literary works like the Ramayana and Mahabharata have described them in detail. Remember the many references to the Pushpak Vimana used by Lord Rama? Thus, we have reason to believe that aviation and the related sciences did exist in India.

While we concede that that aeronautics is a sophisticated and complex domain, and demands much base work and technical infrastructure before an airplane can be developed, the point that needs to be appreciated is that the concept existed in a fairly developed form.

Several ancient texts contain accurate descriptions of the features of airplanes like rudder, fuselage, cockpit layout, flight controls, landing gear and related systems. There are also many details about training pilots, clothing and food for pilots, type of metals used for construction and the fuels used.

According to new searches there was a radar system discovered and guidelined by the Maharishi which was called “Rooparkanrahasya”. According to him “In this system, the shape of the aeroplane was presented to the observer, instead of the mere blimp that is seen on modern radar systems,”.

The ancient techniques were so classified and modernized at that time which still is an unbelievable thing. The information came out as that even in that time the pilots and workers had their specific costumes and systematic collaboration. Use of nature and science was beautifully made possible without any technical sources. Things like vegetation and water resistance grass was used to protect them from any harm.

Without the past there won’t be any discovery. The lost things are found and made better for the welfare of humanity. Hence, in the 21st century, fusion of science and spirituality will happen because of the law of inter-penetration. It is great that we are integrating the inward with the outward.