Born in a Brahmin family in the state of Bengal Shyama Charan Lahiri were a yogi and spiritual guru. Mostly famous by his Kriya Yoga and preached to thousands of his followers. On the count of 5000 people, he taught them Kriya Yoga and also derived his work in books and scriptures. Commonly by his followers and acquaintances, he was also called as Lahiri Mahasaya and Lahiri Baba. Mostly influenced by Hindu Scriptures like Geeta and Mahabharata, his preaching continued for years and hence developed the innate knowledge of Kriya Yoga.

Early life and his contributions:
He had a normal childhood, but perversely his mother died when he was into his young age. As a common person, he lived, married as an accountant and continued his interpersonal and intrapersonal journey till the time he figured out the answers to the questions he was looking for. The Americanized guru Yogananda devotes chapters to Lahiri Mahasaya in his Autobiography of a Yogi. It is online and SRF-published in several after-death versions too, as if edited from the grave. At the age of three or four, he was often seen sitting in meditation, with his body buried in the sand up to his neck. When Lahiri was five, the family’s ancestral home was lost in a flood, so the family moved to Varanasi, where he would spend most of his life.

As a child, he studied Urdu and Hindi, gradually moving on to Bengali, Sanskrit, Persian, French, and English at the Government Sanskrit College, along with the study of the Vedas. Reciting the Vedas, bathing in the Ganga, and worshiping were part of his daily routine.

In 1846, he was married to Srimati Kashi Moni. They had two sons, Tincouri and Ducouri, and two daughters. His work as an accountant in the Military Engineering Department of the English government took him all over India. After the death of his father, he took on the role of supporting the entire family in Varanasi.

His beliefs and accomplishments:
Among Lahiri Mahasaya’s other titles and great operatives are “Yogiguru Bhagavan Shrimat Brahmachari Anilananda Maharaj”. His biographer Jogesh C. Bhattacharya uses that. One or more “Shri” may be put in front of his name too, according to Indian custom. Hence “Shri Shri Lahiri Mahasaya” or “Yogiraj Shri Shri Shyamacharan Lahiri Mahasaya” or “Yogiraj Shri Shri Shyama Charan Lahiri Mahasaya”. The surname Lahiri came to be attached to his forefathers after they received a village named Lahiri in the Bagura district. But really, the surname was Lahiri Sarkar, where Sarkar is a title. Shyama Lahiri did not use it.

In 1861, Lahiri was transferred to Ranikhet, in the foothills of the Himalayas. One day, while walking in the hills, he heard a voice calling to him. After climbing further, he met his Guru Mahavatar Babaji, who initiated him into the techniques of Kriya Yoga. Babaji told Lahiri that the rest of his life was to be given to spreading the Kriya message.

Known as Ujjayi Pranayama, Kriya Yoga relating it to the Hindu Mythological process Samudra Manthan, Churning of the Ocean. By this, it was said the poison of the whole ocean was brought above the surface. Similarly, while performing Kriya Yoga the poisonous elements of the human body get out and it detoxifies the body.
The central spiritual practice which he taught to his disciples was Kriya Yoga, a series of inner pranayama practices that quickly hasten the spiritual growth of the practitioner. He taught this technique to all sincere seekers, regardless of their religious background. In response to many types of problems that the disciples would bring him, his advice would be the same — to practice more Kriya Yoga. Regarding Kriya Yoga, he said: Always remember that you belong to no one, and no one belongs to you. Reflect that someday you will suddenly have to leave everything in this world–to make the acquaintance of God now. Prepare yourself for the coming astral journey of death by daily riding in the balloon of God-perception. Through delusion, you are perceiving yourself as a bundle of flesh and bones, which at best is a nest of troubles. Meditate unceasingly, that you may quickly behold yourself as the Infinite Essence, free from every form of misery. Cease being a prisoner of the body; using the secret key of Kriya, learn to escape into Spirit.

He taught that Kriya practice would give the yogi direct experience of truth, unlike the mere conjectural discussion of the scriptures, and to Solve all your problems through meditation. Exchange unprofitable religious speculations for actual God-contact. Clear your mind of dogmatic theological debris; let in the fresh, healing waters of direct perception. Attune yourself to the active inner Guidance; the Divine Voice has the answer to every dilemma of life. Though man’s ingenuity for getting himself into trouble appears to be endless, the Infinite Succor is no less resourceful.

Kriya Yoga, as taught by Lahiri Mahasaya, is traditionally learned via the Guru-disciple relationship. He recounted that after his initiation into Kriya Yoga, “Babaji instructed me in the ancient rigid rules which govern the transmission of the yogic art from Guru to disciple.”

As Yogananda describes Kriya Yoga, “The Kriya Yogi mentally directs his life energy to revolve, upward and downward, around the six spinal centers (medullary, cervical, dorsal, lumbar, sacral, and coccygeal plexuses) which correspond to the twelve astral signs of the zodiac, the symbolic Cosmic Man. One-half minute of revolution of energy around the sensitive spinal cord of man effects subtle progress in his evolution; that half-minute of Kriya equals one year of natural spiritual unfoldment.”

In Kriya Quotes from Swami Satyananda, it is written, “Kriya Sadhana may be thought of as the Sadhana of the “practice of being in Atman”

The story of Lahiri Mahasaya receiving initiation into Kriya Yoga by the yogi Mahavatar Babaji in 1861 is recounted in Autobiography of a Yogi. Yogananda wrote that at that meeting, Mahavatar Babaji told Lahiri Mahasaya, “The Kriya Yoga that I am giving to the world through you in this nineteenth century, is a revival of the same science that Krishna gave millenniums ago to Arjun; and was later known to Patanjali, and to Christ, St. John, St. Paul, and other disciples.” Yogananda also wrote that Babaji and Christ were in continual communion and together, “have planned the spiritual technique of salvation for this age.”

It is said that speculates that Lahiri initiated Sai Baba of Shirdi into Kriya Yoga, based on a passage in Lahiri’s secret diary.

He gave permission to one disciple, Panchanon Bhattacharya, to start an institution in Kolkata to spread the teachings of Kriya Yoga. The Arya Mission Institution published commentaries by Lahiri on the Bhagavad Gita, along with other spiritual books, including a Bengali translation of the Gita. Lahiri himself had printed thousands of small books with excerpted passages from the Gita, in Bengali and Hindi, and distributed them for free, an unusual idea at that time.

In 1895 he began gathering his disciples, letting some of them know that he would soon be leaving the body. Moments before his passing, he said simply, “I am going home. Be comforted; I shall rise again.” He then turned his body around three times, faced north, and consciousness left his body, entering Mahasamadhi. Lahiri Mahasaya died on September 26, 1895.

Lahiri taught that if one is earning an honest living and practicing honesty, then there was no need to alter one’s eternal life in any significant way in order to become aware of God’s presence. If a student neglected his worldly duties, he would correct him. It was extremely rare for him to advise sannyasi, or complete worldly renunciation by becoming a swami. Instead, he advised marriage for most of his disciples along with Kriya Yoga practice.

Lahiri frequently taught the wisdom of the Bhagavad Gita. His regular Gita assemblies, called Gita Sabha, attracted many disciples. He asked several of his close disciples to write interpretations of the Gita by tuning in to his own realization. Lahiri taught that the battle of Kurukshetra was really an inner psychological battle and that the different characters in the battle were actually psychological traits within the struggling yogi. This understanding would later become the foundation of Paramahansa Yogananda’s commentaries on the Bhagavad Gita. He also taught that the epic story of the Mahabharat showed the soul’s descent into matter and its challenges in retracing its way back to the spirit. 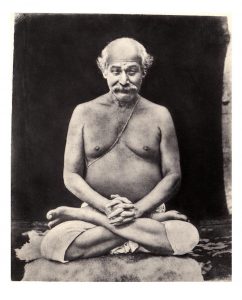 2019-06-29
Previous Post: Shreemad Rajchandra
Next Post: Those who think religion is not reason enough to vote for Modiji