Shyama Charan Lahiri was born to Gaur Mohan Lahiri and Muktakashi, in Nadia district of West Bengal. Born in a Brahmin family, Shyama Charan Lahiri had religious inclinations right from his childhood. At a very young age, after his mother’s death, he was found meditating with his body covered up in sand. After losing his ancestral home during floods, he along with his family moved to Varanasi, where he spent the rest of his life.

He learnt and mastered the languages of Bengali, Urdu, Hindi, Sanskrit, Persian, French and English while studying in the Government Sanskrit College. Along with these languages he was simultaneously engaged in learning the Vedas. Even in his youth he was regularly involved in reciting of the Vedas, ritualistic bathing in the Ganga and worshiping. Later in 1846, he married Srmati Kashi Moni and had four children. He worked as an accountant in the Military Engineering Department of the British regime and consequently moved around the country for official purposes. He donned the responsibility of the entire family after the death of his father.

Later, Shyama Charan Lahiri was posted in the Himalayan foothill town of Ranikhet. There he interacted with Guru Mahavatar Babaji and learned the Kriya Yoga techniques. He was directed by Babaji to spread the Kriya message to society, throughout his life.

Contribution to the Society

Shyama Charan Lahiri, soon returned to Varanasi and began spreading the message of the usefulness of Kriya Yoga. Soon he was able to garner the support of numerous sincere seekers, who belonged to diverse religion, caste and creed. He also organized ‘Gita Assemblies’, where discourses on the Bhagvad Gita and Yoga Kriya were disseminated. Even after his retirement, he continued to be an accountant and a disseminator of Kriya Yoga. He was available to all his devotees who sought his Darshan and performed in front of them the ultra conscious state of Samadhi, without breathing.

“Always remember that you belong to no one, and no one belongs to you. Reflect that one day you will suddenly have to leave everything in this world–so make the acquaintanceship of God now. Prepare yourself for the coming astral journey of death by daily riding in the balloon of God-perception. Through delusion you are perceiving yourself as a bundle of flesh and bones, which at best is a nest of troubles. Meditate unceasingly, that you may quickly behold yourself as the Infinite Essence, free from every form of misery. Cease being a prisoner of the body; using the secret key of Kriya, learn to escape into Spirit”.

He further stated that:

“Kriya practice would give the yogi direct experience of truth, unlike mere theoretical discussion of the scriptures, and to solve all your problems through meditation. Exchange unprofitable religious speculations for actual God-contact. Clear your mind of dogmatic theological debris; let in the fresh, healing waters of direct perception. Attune yourself to the active inner Guidance; the Divine Voice has the answer to every dilemma of life. Though man’s ingenuity for getting himself into trouble appears to be endless, the Infinite Succor is no less resourceful”.

The Gurukul method of education was adopted by Shyama Charan Lahiri to teach the fundamental tenets of Kriya Yoga to his disciples. In this regard he once aptly said, “Babaji instructed me in the ancient rigid rules which govern the transmission of the yogic art from Guru to disciple”.

Swami Yogananda has aptly explained Kriya Yoga as “The Kriya Yogi mentally directs his life energy to revolve, upward and downward, around the six spinal centers (medullary, cervical, dorsal, lumbar, sacral, and coccygeal plexuses) which correspond to the twelve astral signs of the zodiac, the symbolic Cosmic Man. One-half minute of revolution of energy around the sensitive spinal cord of man effects subtle progress in his evolution; that half-minute of Kriya equals one year of natural spiritual unfoldment”.

Swami Satyananda further explained, “Kriya Sadhana may be thought of as the Sadhana of the practice of being in Atman”.

“The Kriya Yoga that I am giving to the world through you in this nineteenth century, is a revival of the same science that Krushn gave millenniums ago to Arjun; and was later known to Patanjali, and to Christ, St. John, St. Paul, and other disciples.” Yogananda also wrote that Babaji and Christ were in continual communion and together, “have planned the spiritual technique of salvation for this age”.

Some of the ardent disciples of Shyama Charan Lahiri were as follows:

Shyama Charan Lahiri suggested that one can establish communication with god, if an individual leads a life of honesty. An individual is not required to shun his routine normal lifestyle to seek the presence of the Almighty.

Panchanon Bhattacharya, a disciple of Shyama Charan Lahiri, started the Arya Mission Institution as per his Master’s wish. The Institution was engaged in publishing and distributing books for free, which disseminated the commentaries of Lahiri on the Bhagwad Gita and other spiritual literature. Shyama Charan Lahiri had himself published numerous small books containing excerpts from the Bhagwad Gita and distributed them free of cost.

Shyama Charan Lahiri died on 26th September, 1895 and a Samadhi was built and dedicated to him at Keshav Ashram in Haridwar. 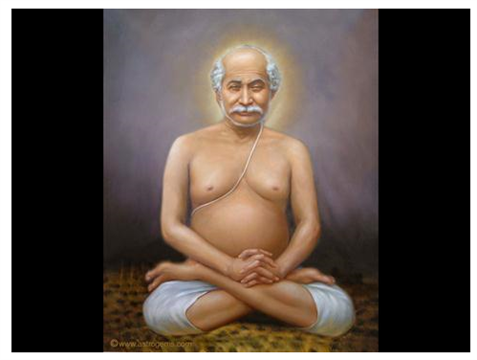 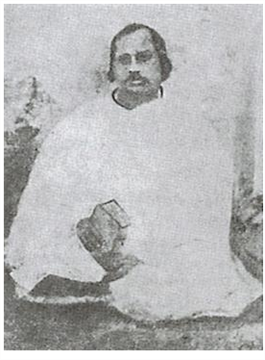