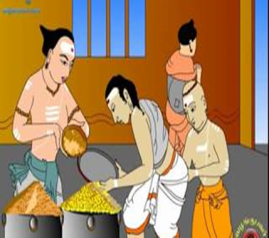 Sirappuli Nayanar was a Nayanar saint, and is considered as one among the 63 nayanar saints. He was an ardent devotee of Lord Shiva and lived his life by worshipping him by chanting his names and by serving his devotees.

Sirappuli Nayanar was born in Thiruvakkur, Nagapattinam district in Tamil Nadu. He was a great devotee of Lord Shiva, and was born in the Brahmin community. He was well versed in chanting the Vedas, and a master in sacred scriptures. The Nayanar saint was well known for his generosity. He invited the devotees of Shiva to his home and offered food and other necessities to them. Sirappuli Nayanar was a humble and a soft spoken person. Sirappuli used to chant the Shiva Panchakshara mantra “OM NAMAH SHIVAYA” on a daily basis. He performed yajnas (fire sacrifices) in order to please Lord Shiva. The nayanar would smear sacred ash on his body. He chanted the shiva mantra for several lakhs of time during his life time. He spent his entire life by serving Lord Shiva and his devotees, and attained SALVATION after his death.

Sivananda Saraswati, praises the greatness of Sirappuli Nayanar with regard to his sincere devotion on god, and for serving his devotees. Sundarar praises Sirappuli Nayanar in the famous text “Tiruthonda Thogai”.

Sirappuli Nayanar had got the habit of regularly visiting the Sri Thanthondreeswarar temple, at Thiruvakkur. A separate shrine is dedicated to him, in the temple. Sirappuli Nayanar is worshipped in the Tamil month of Karthikai, and also worshipped similar to other nayanars in the shiva temples.

Though he got great wisdom, wealth and knowledge, he doesn’t get any pride over that. He remained as a humble and a gentle person, and was praised by the people through his good activities. He had done several pujas in the shiva temples and offered naivedyam (Food offering) to the god and also took care of shiva devotees in a proper manner.