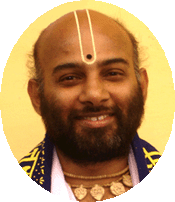 Brahmashri Vittaldas Jayakrishna Deekshithar, was born in Tamil Nadu, in a pious Hindu family, and he is the son of Brahmashri Rama Deekshithar. Vittaldas is one of the disciples of Sri Krishna Premi Swamigal, and Vittaldas learnt Vedas and Hindu holy texts in a proper manner, and visited holy temples of Lord Krishna.

His guru, Sri Krishna Premi Swamigal had                    given the title “VITTALDAS” to him. Similar to his forefathers, Vittaldas is a great scholar and he has been giving divine discourses on Holy texts, and spreading the
“SRI VITTAL BHAKTI SPIRIT” among the masses. Brahmashri Vittaldas used to regularly chant the glorious 1,000 names of Lord Krishna. Sri Vittaldas has formed an institution by name Sri Vittal Rukmini Samsthan, and through that, he is doing spiritual services like performing Puja in the temples, conducting Bhajans, performing divine discourses etc. Vittaldas has been doing spiritual service throughout India, and throughout the year with the help of his disciples, in order to spread the importance of Lord Krishna amongst the people. Sri Vittal das had completed the construction of the temple of Sri Pandurangan and Sri Rukmini Devi at the premises of Sri Vittal Rukmini Samsthan.

He is training his students in Vedas, Srimadh Bhagavatham, Srimadh Ramayanam and Bhagavat Gita. As per his instructions, his disciples are delivering divine discourses to the people.  Sri Vittaldas has formed an institution named as Sri Panduranga Charities through which, he is educating Vedas to the students, providing food to the cows, providing food and medical aid to the poor, and helping in educating the poor students.