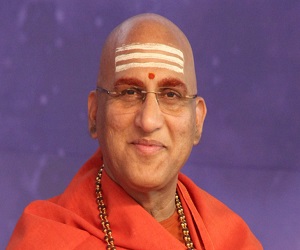 Swami Avdheshanand Giri Ji Maharaj is a spiritual saint, writer and religious speaker, and his native place is Bulandshahr. He is the pontiff of the Mahamandaleshwar, a spiritual organization, and, he has initiated several saints into the bhakti path.

Swami Avdheshanand Giri is the president of Hindu Dharm Acharya Sabha, and he was born into a holy Brahmin family in Khurja, Bulandshahr district, Uttar Pradesh. He left his home, and become a saint at his teenage, and he met Swami Avadhoot Prakash Maharaj, and learnt Vedas, Shastras, Hindu philosophy and yoga from him.

After performing deep meditation in the Himalayas, he had become a saint and a disciple to Swami Satyamitranand Giri . He is also a member of the Amarnath Shrine Board.

At present, he also serves as the President of the Samanvaya Seva Trust, which was established to carry out spiritual as well as social services for the benefit of the society like running old age homes, orphanages, medical and educational aid for the poor etc.  Swami Avdheshanand Giri is an expert on Vedanta and Sanskrit.  He used to give speeches in various TV channels based on Vedanta, discipline, courage and motivation, and he used to write spiritual articles in magazines and in newspapers. Swami Avdheshanand Giri has many popular followers like film personalities and politicians and they have visited him at his ashram. He has received many awards, and he has also written many spiritual books and published it.