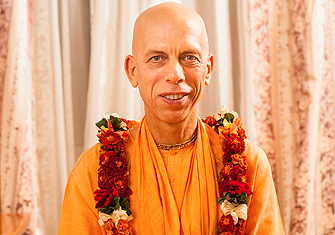 Due to spiritual thirst, Swami Prahladananda had joined ISKCON in the year 1968. While studying in the college, he heard about Srila Prabhupada, and he met him, and then, he became the Chief priest of the temple of Lord Krishna.

Prahladananda Swami conducted Hari Bhajan chanting, and distributed devotional books to the devotees in the temples.

Prahladananda Swami opened Lord Krishna temples in Florida, Houston and Texas, and he also served as the president in the temples. He used to distribute the Bhagavatham and the Bhagavat Gita Books in airports, parks and in public gathering places throughout the United States. He had been doing the divine service of distributing Krishna’s books for several years and still now he is doing that work.

Prahladananda Swami taught to the students about the spiritual love with Krishna, getting enlightenment by following the teachings of Krishna, and accepting Krishna as the divine guru. He still travels all over the world and preaches about the KRISHNA BHAKTI amongst the people. In the year 1992, he became the Minister for Saintly Services, and he also served as the head for many Krishna Temples.

Currently, Prahladananda Swami preaches the subject of divine matters in Europe. He used to keep on journeying various countries, in order to inculcate the devotion among the people.