In: Gurus
With: 0 Comments 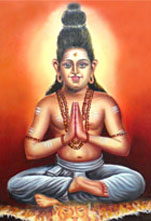 INTRODUCTION
Tholaikadhu Siddhar was a great siddhar who lived in Pondicherry before 300 years, and he stayed in the Manakkula Vinayaka Temple and performed meditation on Lord Vinayaka and got great powers. He was an ardent devotee of Lord Vinayaka who would regularly pluck flowers in the early morning from the nearby flower garden and perform puja to Lord Vinayaka.
He used to eat only fruits and milk which was offered to him by the devotees of Lord Vinayaka. During his period, he has removed the sufferings of the people, and removed the mental worries and physical diseases and made them into healthier persons. He attained Samadhi in the Manakkula Vinayagar Temple.
People in Pondicherry, believes that by worshipping Tholaikadhu Siddhar, they would be blessed with all sorts of prosperities in the world.
Let us worship the great siddhar and be blessed.
“OM SRI THOLAIKADHU SIDDHARE NAMAHA”
“OM SRI VINAYAKAYA NAMAHA”
“OM NAMAH SHIVAYA”
WRITTEN BY
R.HARISHANKAR