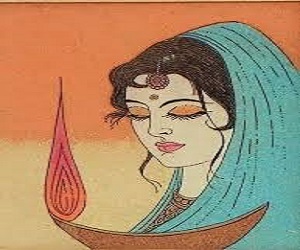 In the Vedic period of Ancient India there were many woman seers who were proficient in the Vedas and even composed some of the hymns in the Rig Veda. They were generally the wives or children of great Rishis and were referred to as Rishikas or Brahmavadinis, the learners and revealers of the Brahman. In Ancient India women were always encouraged to advance spiritually and they were highly knowledgeable, wise, virtuous and pure. Some of the most famous woman seers were Gargi, Maitreyi, Lopamudra, Ghosha etc.

Vaak Ambhrni the daughter of Rishi Ambhruna was another famous woman seer of Vedic times. The Devi Sukta in the Rig Veda is attributed to her. She became a Seer inspired with the knowledge of the Self through whom the Goddess Vak proclaimed her own glory. The Devi Sukta is also known as Ambhrni Sukta and it consists of 8 verses and is dedicated to Vak(speech).This hymn is recited at the end of the recitation of Devi Mahatmyam and it sprang forth from the deep recesses of her heart when she was in communion with Brahman. It occurs in the 10th Mandala as Suktam number 125.

Vaak Ambhrni was a famous woman Rishika or Brahmavadini of the Vedic period. She was highly spiritually proficient and was a Seer through whom Goddess Durga as Vaak Devi spoke. Her purity, wisdom and exalted spiritual state have been recorded for posterity in the annals of Vedic history.