In: Gurus, Vedanta Saint
With: 0 Comments 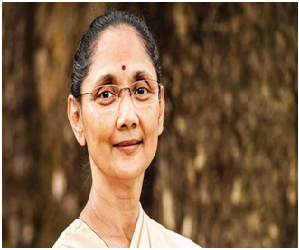 Mata Sunandaji is a famous Hindu spiritual personality, and she is the daughter of the famous philosopher and divine discourser                                     Swami Parthasarathy. Similar to her father, she is also fondly called as Corporate Guru. Her divine lectures were attended by millions and millions of people, and she was highly praised for citing good examples from the Puranas and Vedas, while delivering the lectures. She clarifies the spiritual doubts of the audience, quenches their spiritual thirst, and brings happiness and spiritual interest through her divine speeches.

She has learnt the philosophies and the holy texts of Hinduism under the guidance of her father, Swami Parthasarathy. Mata Sunandaji has been conducting classes for Vedanta, for several years, in order to spread the Bhakti cult amongst the people.

She has dedicated her entire life towards preaching the sweetness of Hinduism and other Holy texts like Bhagavata Purana, Bhagavat Gita and Puranas across the globe. She contains good wisdom, courage and capability from her young age itself through the grace of the almighty. She also gave divine lectures in some of the prestigious universities throughout the world.

Sunandaji is the Chief of the Vedanta Cultural Foundation, a charitable trust founded for flourishing the V      edanta Philosophy amongst the young people throughout the world.

Her lectures were highly praised by the common people as well as by the spiritual admirers. She has been tirelessly doing the noble service of inculcating the “IMPORTANCE OF HINDUISM” in the minds of the people for more than 20 years, and still she contains good energy levels in her mind and body, and her aim is to spiritually motivate the people, by the way of continuously delivering nice lectures for the welfare of the entire world. Sunandaji is also acting as a visiting spiritual professor, in some big establishments, schools and colleges. By seeing her smiling and cheerful face and listening to her wonderful lectures, the viewers would be very much excited with her speech and they would forget their worries, and would change their life style in a good manner.