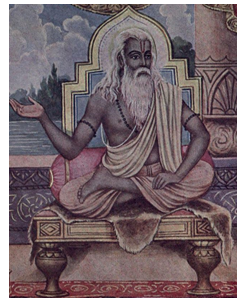 Vedavyasa or Vyasa was born approximately around 3100 B.C. Numerous works have been attributed to Vedavyasa. He is known by many names such as Krushna Dvaipayana, Badarayana, Parashara and Bhagvan Vyasa. However, the most popular and famous among them is Vyasa. The Sanskrit name Vedavyasa literally means the compiler of the Vedas. It is also widely believed that Vedavyasa was an incarnation of Lord Vishnu.

Sage Parashara was the grandson of Brahmarishi Vashishta. Dasharaja, chief of the fishermen colony, one day discovered a large fish and cut it open. To his utter surprise there were two children inside the womb of the fish. The boy child was gifted to the King and Dasharaja happily kept the girl child and named her Satyavathi. Satyavathi grew up to be an adept boat rower and one day offered to row Sage Parashara across the river. During the journey, Sage Parashara explained to Satyavathi that it was an extremely auspicious occasion to give birth to a child, who would grow up to be a great man. Thus, Satyavati agreed and she gave birth to Vedavyasa, with the blessings of Sage Parashara.

Compiler of the Vedas

Earlier called Dvaipayana, Vedavyasa had a number of disciples. He decided to further split the Vedas and simplify it. He thought the Vedas were an extremely rich source of wisdom and knowledge and therefore it ought to be further divided and simplified to enable the common man to read and understand the significance of the Vedas. He therefore, invested the faculties of his four most prominent disciples namely Jamini, Sumanthu, Vaishampayana and Paila, to this task. He later married Jabali Kanya Vatika and had a son from her named Shuka.

Vyasa’s role in the Mahabharata

Vedavyasa’s role in Mahabharata is extremely crucial. A number of important occasions crucial to his presence in the epic are as follows –

Story behind writing the Mahabharata

After conceiving the idea of writing an epic of magnificent proportions, he took a ritualistic bath and sat upon a platform made of durba grass, inside a cave. He started to reflect upon the format of the epic and performed Tapas. After sometime, Lord Brahmadeva appeared in Vedavyasa’s ashram and was received with extreme courtesy. Vedavyasa also revealed the idea of writing an epic to Lord Brahmadeva and asked his help in writing the epic. Lord Brahmadeva suggested praying to Lord Ganesha. When Lord Ganesha appeared before Vedavyasa, he put on a condition that once he starts writing, he would not stop. Vedavyasa also requested Lord Ganesha to understand before writing down the verses.

They began writing the epic on an auspicious day. Vedavyasa began dictating the verses, which would provide mankind with the knowledge of the Purushastras. Vedavyasa composed hundred thousand stanzas for the great epic. He also composed another epic of the same story, which had sixty lakh stanzas. Narada played a very crucial in popularizing the epic.

In spite of composing a mammoth volume of spiritual and religious literature, Vedavyasa was not content with his work. On a particular day, while meditating on the banks of the River Yamuna, Narada appeared before Vedavyasa. Narada explained to him about the lack of praising the Lord in his works. Narada then requested Vedavyasa to dedicate a work to the Lord.

Vedavyasa started to develop a work, with the Lord as the main theme. He described the intention of his work to his son, Shuka. But Shuka could not decipher the meaning of the verses composed by his father. Vedavyasa then narrated the verses to Parikshit, the grandson of Dharmaraja.  Thereafter, the great verses of the Srimad Bhagavatha were composed.

Vyasa also says something about Dharma:

He puts man at the centre rather than God.

He had a great belief in Purusharthas. He says that:

Vyasa gives the message that:

We can never conceive the culture of this great land Bharatha without remembering Vedavyasa. The other great sages were engaged in the task of building the welfare of the people of the world and our shastras take great pride in acknowledging this with gratitude.