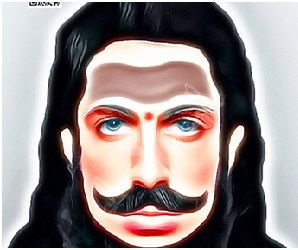 “Dandiswami” was a Hindu Philosopher and a saint, who met the great Alexander  near Taxila during the 4th century B.C. When Alexander met some naked saints near the mountain forests, he came to know about their leader Dandiswami, who            lived in an Ashram, and he was a great Shiva Devotee.

Alexander then sent his messenger to bring Dandiswami before                                                               him. When his messenger met him at his Ashram, Dandiswami had refused to meet his king Alexander, and asked him to meet him at his ashram. Then Alexander went to the forest and met Dandiswami at his Ashram, and they were discussing about the spiritual matters and about the greatness of the almighty. When Alexander was ready to offer him gold and other valuable materials, Dandiswami politely refused, and replied to Alexander, that he is already a blessed soul, and having contact with the divine god, and hence, he doesn’t require any riches in this world. And he asked Alexander to concentrate his attention on devotional matters, instead of conquering the kingdoms, killing lot of soldiers, and committing lot of sins. But Alexander doesn’t listen to his words, and after some time, due to an ailment, he was died. During the time of his death bed, he asked his soldiers, to mention his final saying in the form of writing, and asked them to engrave it in his tomb. The final saying is “I AM THE GREAT KING, ALEXANDER THE GREAT, WHO HAD CONQUERED ALMOST THE ENTIRE WORLD, AND I AM HAVING LOT OF RICHES IN THIS WORLD. BUT AT THE TIME OF MY DEATH, IAM GOING EMPTY HANDED, LET THE VIEWERS MAY SEE MY WRITTEN WORDS, AND LET THEM FOLLOW THE SPIRITUAL PATH”. The details were recorded by the Greeks, and it is still preserved by them.

Hence let us worship the great saint and saviour Dandiswami, and follow the spiritual path and be blessed.