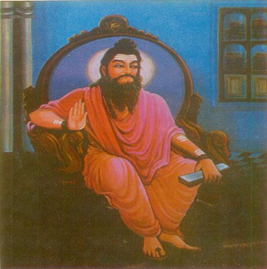 Harihara was a famous Kannada saint, poet and a spiritual writer, who lived in the 12th century AD. He was born in a village in the present day Hassan district, Karnataka, and he was born in the family of accountants, and served as an accountant in the court of King Narasimha. After sincerely serving for a few years under the king Narasimha, he went to Hampi and written many spiritual works. Among his important writings, the marriage held between Shiva and Parvati was considered as an important work, and he was highly praised by the kings and the general public for his great talent in writing beautiful works. In his Girijakalyana, he describes the divine love between Shiva and Parvati.

Harihara was an excellent writer in Kannada language.  It is his practice to write articles only on divine subjects, and usually he would not write any works in praise of the kings.

Apart from the famous work, Girijakalyanam, he also wrote many songs in praise of Shivaparvati, and sung in front of the Shiva temples.

Let us worship the great sage and be blessed.