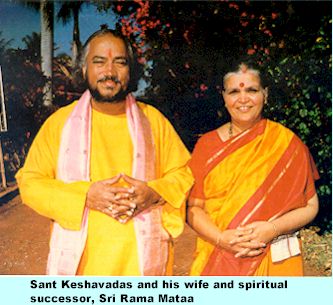 Keshavadas(1934-1997) was a follower of Advaita Philosophy, and he was a scholar in Vedic subjects, spiritual writer and composer of devotional songs. He founded the temple of Cosmic Religion in order to bring unity among all kinds of religious people. His birth name was Radhakrishna.

Sant Keshavadas was born in the year 1934, on a small village near Mysore. At the time of his birth, a priest had predicted that the child would spread the Bhakti of god throughout the world. At his younger age, he had a vision of Lord VISHNU, and due to that, he had chosen the spiritual path.

After completing his law degree, he married Rama, and she fully cooperated with his spiritual activities and helped him to construct an ashram in Bangalore. Sant Keshavadas was very good in writing devotional songs on Lord Vishnu, and sung in the temples. He undertook divine pilgrimages by singing in praise of Lord Krishna, and chanted                    the Krishna Mantra.

In the year 1966, at the KUMBHA MELA festival in Allahabad, Sant Keshavadas met the great divine personality SRI MAHAVATAR BABAJI, and Babaji had ordered Keshavadas to establish centres for cosmic religion throughout the world. Keshavadas and his consort followed his advice sincerely, and travelled to foreign countries and spread the teachings of Sanatana dharma, and established temples. Their teachings were praised by the people in western countries, and due to that, he made frequent visits to foreign countries, in order to spread the holiness of Hinduism among the foreigners. According to him, divinity can be attained only through humanity, and he had done lot of social services at his ashram like providing free food to the poor people, giving clothes, and helping in the marriage of poor girls etc.

He founded several ashrams in India, and also in abroad.

In the year 1997, while giving divine lectures in a temple at Andhra Pradesh, Sant Keshavadas was died, and his wife is following his foot-steps and successfully continuing his divine mission.

Let us worship the great saint Sri Keshavdas and be blessed.